Update 2022-11-24: This website used to run on a Kubernetes cluster managed by Digital Ocean. Now it is a simple static site generated by Jekyll and hosted by GitHub for free. Thank you GitHub 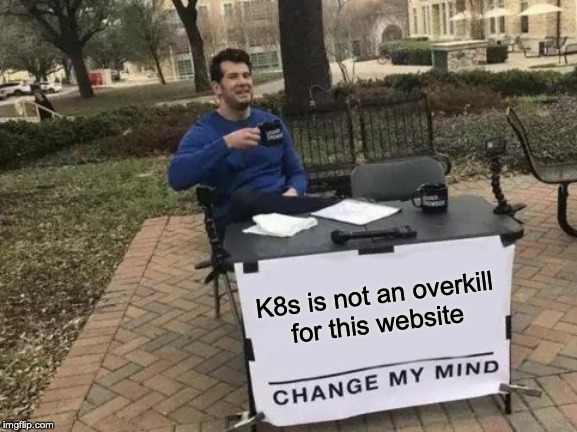 Until Digital Ocean’s managed Kubernetes, having your own Kubernetes cluster was an overkill for small apps: it was hard to configure it right, it was too expensive. Some would argue that it is still the case.

To create and configure a Kubernetes cluster, all you need are a few clicks on Digital Ocean’s online console.

A few minutes later the cluster is up and running. Just download the config file and you’re ready to run kubectl commands.

This is just too easy!

Amazon EKS is entirely a different beast and I believe Amazon made it so complex for a good reason: their solution needs to work for “enterprise customers”, with specific network, security and compliance requirements. Amazon’s solution also works great with its other services: VPC, ELB, Security Groups.

On December 31 of 2019 I completed the migration of my employer’s production workload from Rancher 1.6.x to Amazon EKS, with about 2 seconds of downtime. It took way longer than I anticipated, but along the way I learned a lot about Amazon VPCs, availability zones, subnets, routing tables, VPC peering, NAT gateways, Internet gateways, CIDR IP address blocks, Elastic IPs, network ACLs and IAM policies. This gave me better understanding and appreciation of AWS and its design philosophy.

DigitalOcean has great defaults. It is cheaper and much easier :)

The complexity of deploying workloads is the same on both: Amazon EKS and Digital Ocean Kubernetes.